I began my music  career at the age of eleven as a musician; I played my saxophone on the streets of New Orleans during the Superbowl. I remember being really cold and also intimidated. I had never performed for a lot of people before, especially not for a crowd of passing strangers. I didn’t have the barrier of a stage to protect me. After I convinced myself that I was too cute for anyone to criticize and I began playing the only three songs I knew. 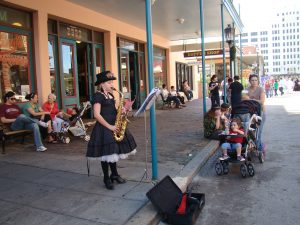 These kinds of  performances are difficult for classically trained musician  because of the proximity of the audience. Performing on a stage can be equivalent to performing in a bubble or another world, the audience can watch but are not part of this existence. On the streets, the audience becomes a part of this world and can see the performers vulnerability and emotion which is not visible when they are on stage.Overcoming my anxieties and performing made me gain confidence in my abilities as a performer. After that, performing in places like Carnegie Hall and The World Saxophone Congress, seemed less scary. This is also how I found my first employer, or how my first employer found me (see more about my work with Das Ist Lustig). 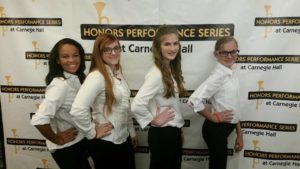 I learn to get better, I keep adding new tunes and places to perform. I frequently visited Galveston Strand and  Tomball Downtown streets. People start recognizing me , and I earned my own money. My first saxophone  teacher thought that I have a potential to do more and she start preparing me for the Honors Performance  Series Competition.  This music competition conducted every year between  about 10,000 nominees  in USA and around the world before just a small percentage of them are chosen as finalists. As a finalist I was invited to New York to perform at legendary  Carnegie Hall in 2016 . 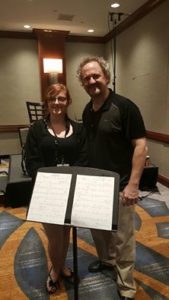 By the age of 15 I was able  to fulfill two of every musician dreams – perform at Carnegie Hall and meet the actual composer of the music played. Famous Michael Markowski, the composer of one of the pieces “The cave that you fear” happened to be in New York and he walked in to one of my rehearsals .

In 2018 I was invited to become part of World Saxophone Congress as a Soloist and as a part of the trio Saxophone Revolution   . I was the youngest performer at the congress.

At the same year I got chance to  participate at Costa Del Arte Music Festival in Barcelona, Spain . Our duet was awarded first place at the competition